And this may prove in the long run to be Lincoln Center’s legacy: It has had a paralyzing effect on the capacity for innovation of the fine-arts groups that once gathered together so hopefully under its outsized umbrella.

A quiet testimonial, perhaps, to the idea that the New York arts scene – like the Lincoln Center itself – may have grown so large that meaningful innovation and aesthetic breakthroughs are crushed. 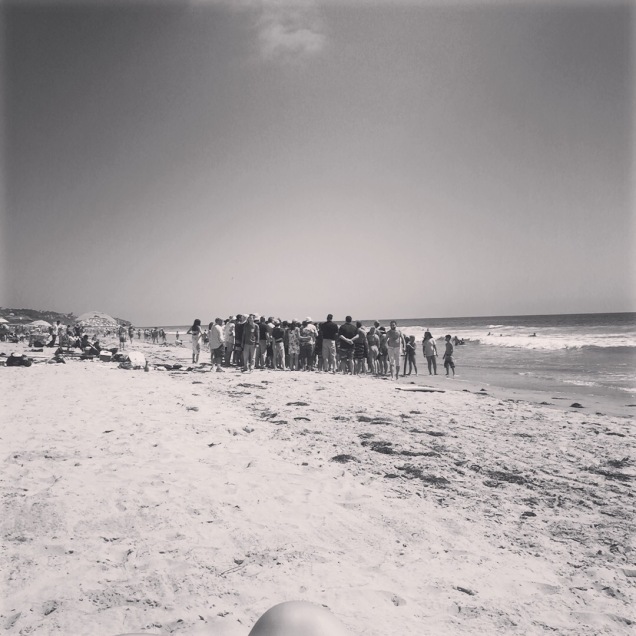 Sitting on Zuma Beach last weekend, and this happened.

Baptism by the shore. Don’t know why, but I couldn’t help thinking about Sister Aimee and the Angelus Temple: evangelical California…

The water problem is part of a larger demographic problem: too many people have moved to California, a place that, given its resource constraints, its seismic instability, and its tendency toward massive brush fires, should have never been settled so densely.

Saval was writing about this five years ago, and it is tempting to buy his argument. Who among us longtime denizens of this state do not occasionally look out the window and wonder “from whence came these masses who cover our natural beauty with concrete and stucco?”

But laying the water problem at the feet of California’s outsized population does not lead us to a solution: if a quarter, or even a third of the state’s current headcount decamped for greener pastures, we would still have crippling droughts.

The water problem is one of global proportions, and the fact that a confluence of climactic conditions is foisting the drought on a fairly wet state should be seen as a wake up call. For a large and growing cohort of the world’s population – even in the developed world – water is no longer a virtually-free and unlimited resource.

The answer is not to line up the Greyhounds and the U-Hauls and depopulating Suburbia Californicus. It is, rather, to put our imagination and our capital to work finding ways to cut waste and to make water use more efficient in every sector.

If we can do that, the water problem becomes an opportunity for our innovative, optimistic state to make the world a better place and get rich in the process. If the great minds of Silicon Valley and the moneyed mandarins of Sand Hill Road want to find a place to bet on the next boom, maybe our drought is the G-d or the Universe or whoever sending us a not-too-subtle signal on where to look.

A Friday reminder of how things used to be: a 1984 video of a ride on the now-demolished and sometimes-missed Embarcadero Freeway, 3 minutes in each direction.

There are moments, driving up Third Street and then Kearney on my way to the Financial District, that I sorely miss the elevated, two-level concrete monstrosity. And then I have lunch outside on the Embarcadero, and I remember what an awful eyesore the thing was.

Not everything an earthquake does is a bad thing. Sometimes Nature does for us what we should have done for ourselves.

In his 2009 study Outrageous Fortune: The Life and Times of the New American Play, Todd London, artistic director of the playwrights’ advocacy organization New Dramatists, reaches a bleak conclusion: “Financially speaking, there is no way to view playwriting as anything other than a profession without an economic base.”

Alena Smith
“You Can’t Make A Living: Digital Media, the End of TV’s Golden Age, and the Death Scene of the American Playwright”
Los Angeles Review of Books
December 8, 2014

Here’s the unspoken part of that last sentence: it was not always that way. Ask Neil Simon.

The elephant in the room is that the economic base for screenwriters is being eroded by the combined onslaught of digital video and unscripted television. Late at night when we’re all lying in bed and our deepest fears come out of our subconscious to play, this is the cloud that hovers over the wordsmiths of the Golden State.

I don’t buy the “Doomsday is Nigh” for writers nonsense. The media for storytelling have changed regularly since Neanderthals began drawing on cave walls. The opportunity for great storytelling will always be there. All that will change are the tools we will use for doing it.

Ebooks have opened the door to books between 20,000 and 50,000 words, sending some of us back to look up “novella,” “pamphlet,” “chapbook,” and “monograph” in search of a term to fit our new formats. YouTube is becoming a repository for a growing library of scripted content. And as video game storylines become more flexible and complex, a screenwriter’s art is more essential than ever.

Is it going to be difficult to figure out how to make a living at this? Naturally. And a lot of us won’t: most of us who write will find that it becomes either an avocation or a means to a living rather than a living itself. But with apologies to the Bard of Avon, the play is the thing: man will ever need storytellers, and we need good ones now more than ever.

Ashes and Bullets – The New Yorker.

Long after we have (hopefully) forgotten who Christopher Dorner was, I hope we are remembering this Susan Straight story that was inspired by Dorner’s bloody demise and the bloodier acts that preceded it.

Straight writes with unearthly cadence of a day to day world haunted by guns and ghosts. Her cri de cour is not an anti-gun screed. She rejects that temptation to dive into something more elemental: the effect that the proximity of an instrument of death has on our psyches; the changes that such a presence wreaks on us over time; and how those changes drive us into different directions.

Can a man of peace living in a place of strife rise above death while living in an armory? Does the mere presence, visibility, and accessibility of armaments fundamentally alter us? Or are we making more of this than we should? This is the quiet challenge Susan Straight throws at us.

I am neither an advocate for gun control nor a member of the National Rifle Association. I support the Second Amendment as a tripwire for tyrants, yet I am troubled by the havoc wrought by guns. A lifetime of cogitation suggests only that there are no simple solutions, but this does not mean we should stop probing for answers, and Susan Straight nudges us in this direction without preaching, without grandstanding, without vilifying. We could use less political grandstanding on this and the other issues that vex us, and a lot more of her brand of subtle genius.

Los Angeles airport was not always alongside the dunes in Westchester. Back when LAX was still a seaside bean field, Grand Central Terminal a few miles north of Downtown L.A. was where passengers landed in the Southland.

This three part video series tells the story of how Glendale was the cradle of commercial aviation and aerospace in Southern California. The series is a delight for both airplane buffs and history fans.

Losing the Ability to “Lose Oneself” | The American Conservative.

This superb piece by Gracy Olmstead explains how the academicization of the study of literature has placed a barrier between us and fiction. Quoting William Geraldi from VQR, she notes:

Literature will not be harnessed for any cause, no matter how an academic distorts it, and literature that harnesses itself in the service of a cause is not literature at all but agitprop.

Bravo, cubed. I want to read Grapes of Wrath, The Last Tycoon, Black Boy, and The Color Purple as stories about people, not political tracts on workers rights, the corruption of Hollywood, civil rights, and homosexuality. If there are messages on those themes, fine, but ease up: the author managed to avoid pedantry, so why throw it back in?

While we’re reclaiming literature, let’s rehabilitate Dead White Guys. Mark Twain, John Steinbeck, F. Scott Fitzgerald, and Dashiell Hammett happened to have been male and caucasian but were culpable for neither, and to deny ourselves a vast chunk of the Western Canon simply because the authors were masculine palefaces is as stupid as ignoring great works of people of color because they were, in fact, people of color.

We can argue about what makes a book great, good, mediocre, or awful. But please, let us stop using the author’s race, religion, color, sexual proclivities, gender identity, slave ownership, personal foibles, or country of origin as a means of either elevating or ignoring a great work.

If we could just remove politics from our study of literature, then maybe we could all feel good about losing ourselves in great books again.

Bill “The Fox” Foster is long gone but still mourned. Those of you who made the trek to his smoky little pub at Wilshire on the Santa Monica city line will remember his weekly performances as a distinctly American version of Octoberfest: beer, raunchy songs, and unrestrained testosterone.

If Fox were working today, he would probably be the subject of an angry documentary made by some earnest UCLA Sociology grad students incensed by his apparent advocacy of alcoholism and misogyny. Fortunately, Fox was spared by fate from such ignominy, yet many of us who remember him (and his wife, who ran the joint with an iron hand) yearn for a place where, for a couple of hours a week, it is okay just to be a guy with other guys.

My fellow flack Sid Robinson has a superb post on his site, a personal eulogy of sorts both to The Fox and his eponymous SaMo landmark, The Fox Inn. Read it and remember. 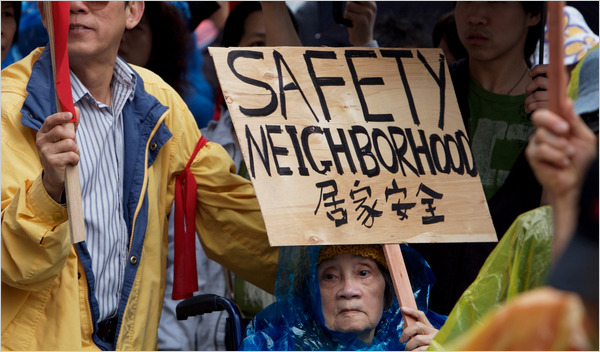 The history of San Francisco is a standing testament to an important fact: when the police stop protecting the citizenry, the citizenry will take their protection into their own hands.

Nobody wants the Tongs back, least of all the families and the businesspeople of Chinatown. But if the police do not protect the people of the Asian community from predators like Eminike, Bolmer, and Blunt, something is going to fill the vacuum, and it won’t be Batman. It will be vigilantes.

The rallies must be wake-up for a slumbering city.