He’s all the way across the room, and he says it in a voice loud enough to quiet O’Tooles for a moment. This is a Chicago sports bar. It is Game One of the National League Championship Series. The Los Angeles Dodgers are in the middle of teaching the defending champion Chicago Cubs a lesson in humility. The bar – indeed, the whole city – is wound so tight the air thrums as you walk.

And I am a die-hard Dodger fan with just enough IPA in me to stop caring who knows it.

“The Dodgers SUCK,” he repeats. This time he’s louder, and he is supported by a broken chorus of interjections expressing everything from full-throated support to mild “chill out dude” disapproval.

This is one of those moments when I ask myself what the right thing would be to do. As a guy. As a dude. I think about the thin veneer of civilization. I tell myself that sports is an opiate, and that I have been manipulated into this by a cynical media establishment that thrives on stoking sports rivalries.

And I don’t care. This guy hasn’t just insulted a bunch of grown men throwing a ball at each other. He has transgressed against something both more personal and far larger.

I think about the games I watched growing up. The time we went with Dr. Bing, our baseball coach, sitting so close that my heroes came to life in front of me.

I think about the times my dad took me to watch the guys play, and what it meant for he and I to listen to the post-game show as we drove the old VW van home down Sunset late at night.

I think about the giddy joy of the 1981 World Series, when we showed the most powerful Yankees squad in five decades that grit and determination beats glitz and polish when it counts.

I think about fifty years of admiring a team that prided itself on being the anti-Yankees, the Boys from Brooklyn, Dem Bums.

I think about Sandy Koufax, who refused to pitch in a critical World Series game because it landed on Yom Kippur, and in so doing showed the world what it meant to be a Jew.

I think about Jackie Robinson, who with the backing of Dodger management silently suffered innumerable hurts as he forged the path for African-Americans into the major leagues, and in so doing showed the world what it meant to be a man.

I think about Ray Campanella, upside down in his car on a Harlem Street after hitting black ice on a winter night, his back broken, his career over, then spending the rest of his life working in the Dodger front office and showing the world that there was no such thing as “handicapped.”

And I turn to look at the gone-to-seed neck-bearded fuck whose alcoholic partisanship has turned him into a drooling, knuckle-dragging neanderthal.

And I realize that I am about a pubic-hair’s width away from getting into my first bar fight, alone, deep in enemy territory. And I wonder if Blue Shield will cover my heartfelt yet doomed defense of our team, or whether the adjuster will boil the whole thing down to idiocy and refuse to pay on the grounds that the cause of my broken bones, lost teeth, and contusions were the direct result of an uninsured pre-existing condition.

This is the last place I want to be, but the testosterone and adrenaline are pouring into my system, and I start to get up.

The waitress is smarter than all of us. She comes over, looks me in the eye, smiles, and sets down another pint of IPA.

“On the house,” she says. “And I’ve got some fresh tater tots on the way.”

I look over at Neckbeard. The bartender just put an order of hot wings in front of him and the boys. I’m betting these were free, too.

I look back at the waitress. She smiles.

“Enjoy the game,” she says. “And welcome to Chicago.”

Manhood satisfied, I sit down again, the anger gone, replaced with a sympathetic good will toward old Neckbeard.

The Dodgers don’t suck, I tell myself. But for the moment, I am happy to let them prove it themselves.

The tots arrive, the Dodgers are winning, and I am left alone to contemplate the madness we – I – have yet to outgrow. 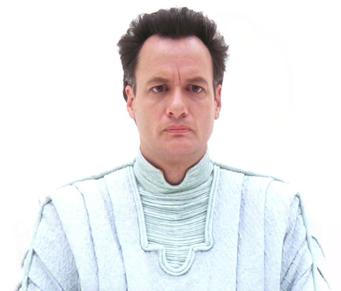 I have at last finished my extended binge of all seven seasons of Star Trek: The Next Generation. The series has aged remarkably well, to the credit of its cast, its crew, and the legion of scribes who ensured an upward trajectory of plot-lines and issues that lasted almost to the very end.

The watch-through gave me a chance to understand and appreciate aspects of the show that I had missed during my spottier watching in the past. One of those aspects was Q, the near-omnipotent being who regularly showed up to toy with the Enterprise crew on the pretext that it was his way of testing the value of humanity as a race.

My revelation: Q was Loki, the trickster of his race, and the Q Continuum a reinterpretation of the Asgard of Norse myth.

Armed with that thought, I went back and re-watched the episodes with Q, including the series pilot, “Encounter at Farpoint.” Q came across as less and much more sympathetic. In the end, Q is a tragic figure, neither of his world nor ours, and doomed to testing the boundaries between the two.

And yet, there was something profoundly sad about how Q was developed as a character.

The Trek universe, at its best, it has been a compelling forum for exploring the larger questions that face humanity. Those questions are rarely resolved, but they don’t need to be – it is in the probing of those questions that we learn about ourselves.

Where no Trek has gone, though, is in an exploration of the unresolvable quandary of whether a higher power exists. The Trek universe has either studiously avoided the debate, or it has engaged in long-winded  plot lines that dismiss the question as a matter of myth, superstition, or the naive misunderstanding of a more evolved being by a less evolved race. We can agree to disagree on many things, Trek tells us, but religious believers are suckers and simpletons.

This has never been enough to warn me away from the Trek universe, because despite this failing I continue to find the ouvre provocative and compelling.

I continue to hope that some wise squire of the Roddenberry legacy will give writers the permission to leave the question of G-d open and on the table. But I will not hold my breath: I know my fellow Trekkers too well, and for them the vastness of the Final Frontier is all the G-d most of them will ever need.